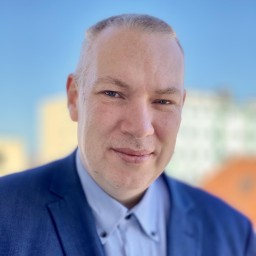 SEO Geek on the Go – My Laptop and Cloud Solution.

OK, I admit – I am not only an SEO geek. I love gadgets, as well. Technology is fun, and it is fascinating to play with stuff like Philips Hue, Google Home, IFTTT, and things like that.

Contents hide
1 Unboxing the beast
2 Changing my religion
3 The two-way solution
4 My new “On the go laptop.”
5 Unboxing The Asus Chromebook 436 Flip (My wife insisted)
6 The Switch from Windows to Chrome OS.
7 Conclusion: switching from a Windows Laptop to a Chromebook.

Working with SEO also requires many tools, and when I am riding the train or traveling, I always miss my blazing fast 1 Gbit connection and my stationary monster PC. (Core i9, 32 Gb Ram, GeForce RTX 2070 8 GB,  2 x 256 GB SSD drives in raid + 8 TB conventional drive).

During the years, I have had several laptops like Lenovo, HP, Asus, and even the first Mackboor Air (boy, that was expensive and hardly never used!).

I bought that laptop because I thought it was a great buy. It was super slim, and the specs were decent enough.

However, what I disliked was mainly the battery life – 3 hours if I was lucky. There were also minor things like the screen (little gap on the button).

It was not convenient for more heavy use, so instead, it became my wife’s new best friend.

I decided it was time for a new laptop, and this time I decided that I would rather spend a little more and get some decent hardware specs.

The requirement should be an Intel Core i7, 16 GB ram, dedicated graphic card, and 512 GB SSD. After doing some research, I decided that my new baby should be the ASUS ZENBOOK 14 UX431FL.

Just like in the shop, I enjoyed the “look and feel.” Excellent design, right keyboard, responsive trackpad, and a decent screen.

It powered up pretty fast, and I was ready for my favorite part – installing and configuring my primary software (Office, Antivirus, and firewall) and customizing the look and feel.

So what is better than brewing a big mug of coffee, sit comfortably on the sofa and start the process.

Armed with download links and license keys, I went ahead with the installation.

I was less than 10 minutes into the process before I heard a familiar sound – a laptop fan spinning like crazy.

I thought this was a bit annoying since I was not even stressing the system – just installing software.

Of course, it is almost impossible to get a laptop with a fast processor like a Core i7 with passive cooling, but at this moment, I was not even stressing the system.

One thing was the fan, but the laptop also turned so hot in the button that I had to remove it from my lap and put it on the table – obviously a “tabletop and not a laptop.”

I was about 30 minutes into my installation process when I noticed that the remaining battery life said less than 3 hours left. I was like, “WTF? Are you kidding me?”.

At this very moment, I made up my mind – you are going back to the shop, baby! (at least I got the option for a return and full refund).

The next day I returned the laptop, and the seller would like to sell me another computer.

But I already made up my mind: no laptop with the specs I required would be able to fulfill my needs.

It might sound a bit hysterical, but I am merely allergic to fan noise – especially when writing.

I love Mack books’ designs, but since I rely on Windows software like SEO Power Suite, I am aware that you can Install parallel Desktop and run Windows on a Mac, but that is not an ideal solution.

Then, of course, I could have chosen a Windows laptop with a slower processor or passive cooling. I even considered a laptop with an AMD Ryzen processor.

The requirement was still a lightweight laptop that would be fast enough for my daily tasks when I was on the go.

When you are on the go, one of the other problems is software that runs different processes like an SEO Audit, scraping, etc.

You might face that the internet connection on a train is not stable, so you have to postpone such tasks.

So my quest was the following:

The solution started to grow in my head about a week later, what about a Chromebook?

I concluded that I would need to rethink the scenario with SEO software carrying out longer processes when I was on the go.

It requires a stable and fast internet connection, and some of those tasks I run can take hours, days to perform.

Therefore, I decided to transfer that kind of SEO software to a virtual private server that would be running. Windows.

I have used VPS servers many times before, but mainly for scraping purposes and automated services.

There are many providers, but if you want a decent VPS with a good processor, enough memory, and plenty of traffic, it often costs an arm and a leg.

I have spent a lot of time researching, and the best deal I could get was from Contabo. They offer VPS at a very affordable price.

This beast costs $33 per month (but they also have smaller VPS if you are not as crazy as me!).

You probably already guessed it, I went for a Chromebook, but why?

To be honest, I had a Chromebook for about two years ago. And to be brutally honest, I was not impressed.

Granted, it was a cheap laptop, but the CPU was too slow. There were only 4 GB of memory and 32 GB of storage.

It was only a royal pain in the behind – and not even suitable just for writing or responding to emails.

So I started my quests reading many reviews, and I concluded that I needed a laptop with a Core i5 processor and 8 GB of memory.

I would need a minimum of a 128 SSD drive but would prefer 256 GB. The screen size area should be as big as possible. I hate wasting 20% on a black frame on the screen button!).

I like aluminum laptops with a responsive keyboard with backlit, and a decent trackpad. A Touch screen would be nice as well.

After doing some extensive research, I made up my mind – my new laptop should be a Chromebook. My choice was the Asus Chromebook Flip C436.

This Chromebook met all my requirements, and on top of that, it is a 2 in one. I can flip the laptop so that I can use it as a tablet. That is an excellent feature if I just want to browse the Internet, read news or emails while watching TV.

The battery life is great!, and since the machine has passive cooling, I can use it on my lap when writing.  I am actually writing this article entirely on this Chromebook, the sofa! 🙂

I can even use the Kindle App and use it as an Ebook reader in bed.

I also had an iPad Pro which I mainly used for that kind of stuff, but after I got the Chromebook, I decided to get rid of the iPad – and I don’t regret it.

The Switch from Windows to Chrome OS.

Since I am also using this Chromebook for work, I was concerned about how life on the go would be without Windows.

Before I bought it, I already checked that I could run Microsoft Office 365 in an App – and boy, it works great – even Outlook.

I am also able to connect directly to my Windows VPS server using Remote Desktop Manager. That gives me access to all my Windows SEO applications and the “native Windows experience.”

Compared to my Chromebook experience two years ago, this has been a pleasant journey so far.

I was a bit concerned about losing the Internet connection on the go, but if you are writing a doc, the Chromebook will store a local version until you can sync online again. So no worries there.

I was surprised to notice that it is even possible to run Linux tools and editors (That might call for some more geek time).

The Specs of the Asus Chromebook Flip C436:

Here is what the Reddot Jury stated:

The ASUS Chromebook Flip C436 has an extremely slim chassis that weighs only 1.1 kg and is crafted from a magnesium alloy. It is equipped with Wi-Fi Master technology for fast network connections and a long-lasting battery that powers the laptop for up to twelve hours on a single charge. A special feature is the finish in Aerogel white, which creates a shimmering effect and lends the device a different shade of colour depending on the incidence of light.

Statement by the Jury

The convertible laptop captivates with its innovative surface coating, which gives it an appearance that is noble and futuristic in equal measure.

Conclusion: switching from a Windows Laptop to a Chromebook. 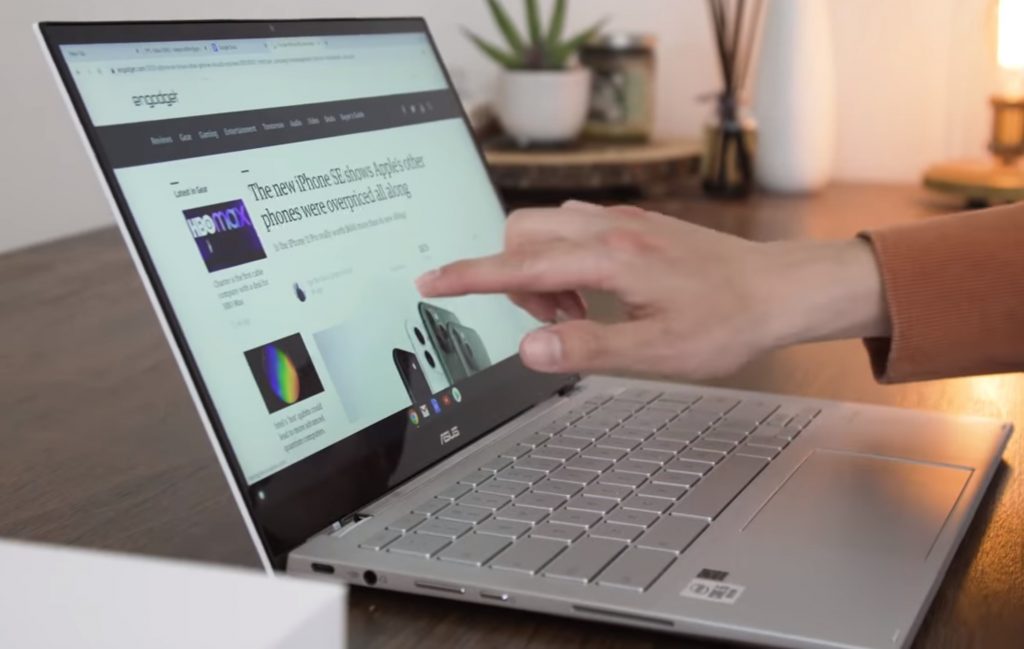 For me, it has been a great experience so far. Even my wife has noticed that I finally seem to be satisfied (That is highly unusual when it comes to me and Gadgets)

I know that my needs are a bit more different than most of the users.

Not everybody needs Windows SEO programs like SEO Power Suite running on a VPS (but if you do, check out Contabo!).

The only downside is if you rely on playing Windows games on your laptop or have a specific piece of software that only runs on Windows.

If you consider a Chromebook, you might prefer a different Chromebook than the Asus C436 Flip, depending on your needs.

But a piece of sound advice would be to aim for a model with a Core i5 processor or similar. Avoid models with only 4 GB of memory.

Even ChromeOS is lighter than Windows, 4 GB of memory is not providing a good experience, so aim for a model with 8 GB ram.

It might be tempting to save a few bucks on storage but aim for at least 128 GB storage.

You never know if you would be in a situation where you need to download a few Netflix episodes of your favorite show.

For the best overall experience, stable wifi is a must. At home, I am using a Google Nest Wifi (One router and two access points). That provides blazing-fast wifi to every room in our apartment (127 square meters).

Hopefully, you can use some of my experiences, and I would love to hear if you have experience with Chromebook/ChromeOS – how do you use it?

Please log in again. The login page will open in a new tab. After logging in you can close it and return to this page.